Phobias are associated with an irrational fear that people have or carry with them. Vehophobia is the fear of driving. Why would someone fear driving?  In many cases, the fear stems from a traumatic injury in a previous car crash.   Call it vehophobia or call it PTSD the result is the same: severe anxiety getting into a motor vehicle.  Many have a phobia of dying in a car accident.

From a car accident attorney’s perspective, emotional harm is the single biggest harm in the vast majority of our cases.  So the PTSD that stems from car accident is right along the line of the damages bring in these lawsuits.  Is this harm correlated to the severity of the crash?  It generally is.  But regardless of the severity of a car accident, vehophobia is a very real and prevalent issue many people experience after enduring car accident.

The fear of driving after a car accident is technically a form of Post-Traumatic Stress Disorder (PTSD). PTSD, which is most commonly associated with war veterans, actually can be set off by any terrifying incident, including the trauma of almost dying or being in a serious car accident.

The fear of driving persists long after the initial car crash for many different and unique reasons. However, there are some general ideas behind vehophobia that prevent people from driving:

Regardless of the reason, the results can be extremely debilitating and can alter someone’s life. Your doctor may recommend a combination of medication and psychotherapy, but your psychological injuries may be increasingly challenging to recover from. If your injury impacts your ability to drive, it may limit or alter your life in significant ways. This is why such injuries are compensable when the collision is the fault of someone else’s negligence.

If you or someone you know is suffering from vehophobia, you know that it may manifest itself in very different ways. This form of PTSD can cause someone to experience mood disorders and depression that drastically affect their day-to-day life. Some of the most common effects caused by vehophobia and PTSD induced depression are:

How Do I Get Past My Venophobia

When venophobia symptoms interfere with your ability to drive or function altogether, finding the right treatment is vital to your recovery. There are four main tools: therapy, driving courses, support groups and mediation. These tools explained below may allow you or a loved one to get life back on track post-accident.

Try to dig up verdicts and settlements for victims with vehopbobia and PTSD is a challenge.  Because trying to thin slice the emotional distress component is sometimes very hard to do. That said, 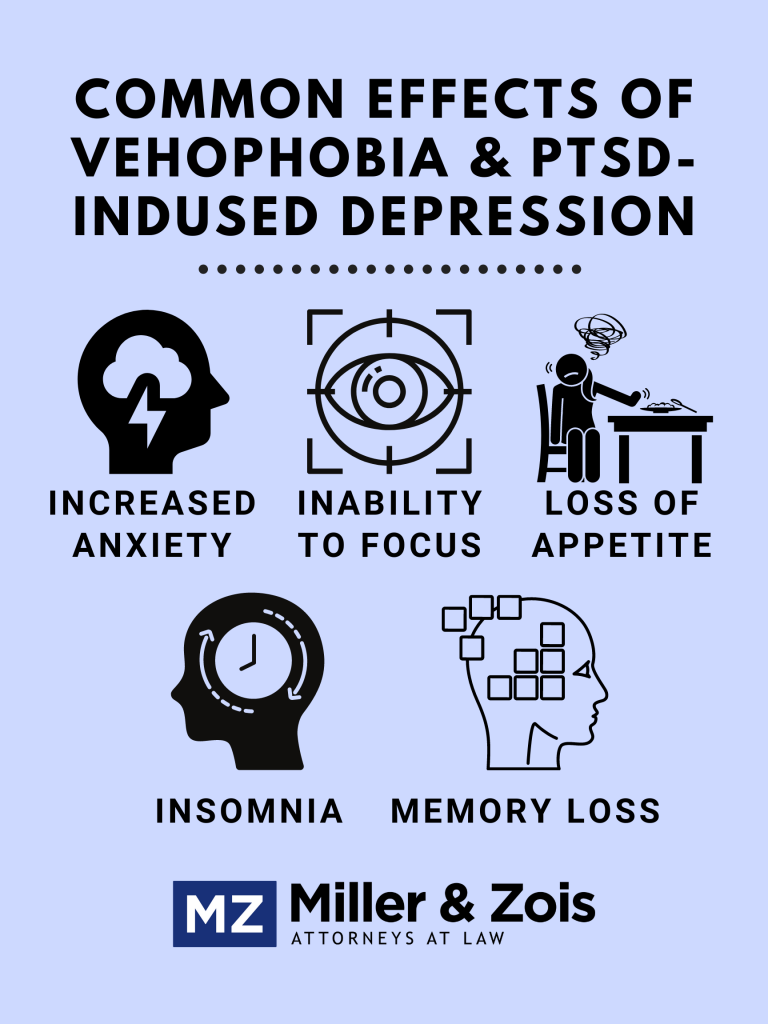