COVID-19 Notice: We are providing FREE consultations via phone or video conferencing for your safety and convenience. Learn More »

Phobias are associated with an irrational fear that people have or carry with them. Vehophobia is the fear of driving. Why would someone fear driving?  In many cases, the fear stems from a traumatic injury in a previous car crash.   Call it vehophobia or call it PTSD the result is the same: severe anxiety getting into a motor vehicle.

From a car accident attorney’s perspective, emotional harm is the single biggest harm in the vast majority of our cases.  So the PTSD that stems from car accident is right along the line of the damages bring in these lawsuits.  Is this harm correlated to the severity of the crash?  It generally is.  But regardless of the severity of a car accident, vehophobia is a very real and prevalent issue many people experience after enduring car accident.

The fear of driving after a car accident is technically a form of Post-Traumatic Stress Disorder (PTSD). PTSD, which is most commonly associated with war veterans, actually can be set off by any terrifying incident, including the trauma of almost dying or being in a serious car accident.

END_OF_DOCUMENT_TOKEN_TO_BE_REPLACED

The COVID-19 pandemic sparked a massive economic shutdown and prompted millions of people in Maryland and across the U.S. to stay at home and off the highways. Anyone who has ventured out or maybe retracted their daily commute recently has probably noticed the amazing impact this has had on eliminating traffic. Even at the peak of rush hour these days you can expect to find traffic on both the Baltimore and DC beltways free and clear. With few people commuting to work there are just way fewer cars to share the roads with. It’s like we turned back the clock 30 years on traffic volume but kept all the new road improvements.

Not surprisingly this has caused the number of auto accidents on the roads to dramatically plummet. Auto insurance companies like State Farm and Nationwide are even advertising premium refunds to policyholders.  But if you assume that this means that the roads are now safer think again. The sudden emergence of wide-open space on Maryland’s highways has apparently tempted many drivers to unleash their inner need for speed.

The Maryland State Police and other organizations that monitor highway safety have reported that drivers are going much faster and getting more reckless. People feel like they can drive as fast as they want to now and the result is an alarming trend. Instead of being safer because of reduced traffic, the roadways in Maryland and the U.S. are actually much more dangerous now.

END_OF_DOCUMENT_TOKEN_TO_BE_REPLACED

No matter the circumstances, getting into a car accident is a frightening and sometimes traumatic experience. This fear can multiply tenfold for pregnant women that are concerned not only for their own health but for the health and wellbeing of their baby.

Our law firm has represented many mothers-to-be injured in car accidents in Maryland and Washington, D.C.  There is typically no serious injury to the mother in most car crashes and the mother’s injuries rarely meaningfully impact the unborn baby.  But there are several of the more severe injuries that pregnant women can suffer from as a result of a car crash.

What Is the Greatest Fear After a Car Accident While Pregnant?

A placental abruption can lead to internal bleeding, hemorrhaging, premature labor, and miscarriage. What’s even more concerning is that sometimes there aren’t necessarily any noticeable symptoms of placental abruption immediately following the accident. It is potentially fatal to your baby and dangerous to your own health.

END_OF_DOCUMENT_TOKEN_TO_BE_REPLACED

Sciatica is a type of nerve pain that my team and I repeatedly hear about from our auto accident clients. It is also known as lumbar radiculopathy. Below, I outline this condition, what causes it, treatment options, and similar conditions. 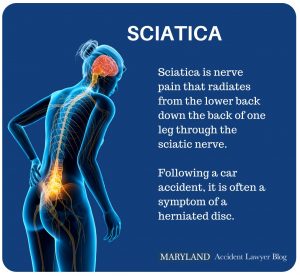 Sciatica is pain that runs down the back of the leg. It is named after the sciatic nerve, a nerve that originates in the lower lumbar spine and then travels down the back of both legs. Sciatica pain is felt all along this nerve, from the lower back, to the pelvis, hips, and buttock, and to the thighs.

This pain is usually described as shooting jolts of pain, and sometimes as a burning pain. Sitting or standing in one place for a long time or certain movements, such as twisting, may cause more severe pain.

Car accidents commonly cause nerve damage because the sudden stop or change in direction causes injuries to the spine. These injuries are often minor enough that they don’t immediately seem problematic, but they may result in nerve pain that can last for months or years in severe cases.

Sciatica after a car accident may be a symptom of one of the conditions described below.

END_OF_DOCUMENT_TOKEN_TO_BE_REPLACED

Traumatic brain injuries can occur in car accidents in a number of different ways. For example, the head may collide with the airbag or be pierced by a projectile. It is possible for other bodily injuries to lead to brain damage, such as a broken trachea that deprives the brain of oxygen. This article discusses the different mechanisms of brain injury in car accidents and their effects on the brain.

Coup-contrecoup is a term used to describe a particular mechanism of brain injury in whiplash and similar traumatic scenarios. When the head whips back and forth and/or collides with an object, the brain moves inside the skull. This causes the brain to collide with the skull.

END_OF_DOCUMENT_TOKEN_TO_BE_REPLACED

Most of us have experienced some neck pain or lower back pain in our lives. As a personal injury lawyer who handles car accident cases, I see these complaints all the time. Car accidents exert extreme forces on the human body, particularly the spine.

As the car comes to a sudden stop, the body lurches forward and is caught by the seat belt, causing the neck to whip quickly. This is what is commonly known as whiplash.

END_OF_DOCUMENT_TOKEN_TO_BE_REPLACED

You get in an accident. The other driver’s insurance company denies the claim.  Your question is: what do I do if my car insurance claim is denied?

Insurance companies deny car accident claims for good reasons and bad.  The reality is insurance companies make money by taking premiums and not paying out claims.  So their default thinking is finding a reason to deny a claim.  Is this bad faith?  Maybe.  But you really don’t care.  You just want to get compensated.  The important thing to remember is this is why we have car accident lawyers and a civil justice system.

What are some reasons insurance companies deny car accident claims?

END_OF_DOCUMENT_TOKEN_TO_BE_REPLACED

A recent study conducted by the Highway Loss Data Institute found that collision avoidance systems installed on 2013-2017 BMW models showed claim rate reductions in collisions, property damage, and injuries. This shows that this technology has the potential to reduce auto collision and injury rates.

As we are seeing with the coronavirus, fewer accidents don’t only save precious lives. There is less of a toll on our hospitals and, yes, our insurance companies that that can help reduce health care and insurance costs.  So anything that comes along that can move us to a safer future is a very good thing for all of us.

What are collision avoidance systems?

END_OF_DOCUMENT_TOKEN_TO_BE_REPLACED

In the context of auto accident insurance claims, the acronym SIU refers to “Special Investigation Unit.” All the big auto insurance companies have an SIU of some type. The primary purpose of these investigation teams is to uncover fraudulent claims activity in auto accident cases.

Insurance companies seem to think that auto accident claim fraud is widespread and pervasive. I disagree with this view as to how prevalent claims fraud is. However, there is no dispute that many car accident claimants either exaggerate their injuries or even make them up entirely.

What is an SIU?

In the world of insurance injury claims, “SIU” means “Special Investigation Unit.” Almost all insurance companies have special investigation units (SIUs), although the actual name of the unit may vary depending on the insurer. The core purpose of SIUs is to root out fraudulent injury claims. The SIUs seek to determine whether victims in car accident cases are exaggerating the scope of their injuries, getting unnecessary medical treatment to try to increase the value of their case, or even staging the car accident. As GEICO explains, the goal of an SIU is “to detect, deter, and defeat insurance fraud.”

END_OF_DOCUMENT_TOKEN_TO_BE_REPLACED 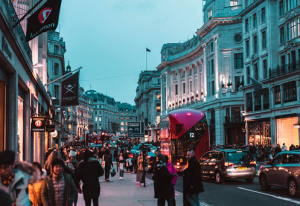 We are not the only ones.  The national average is also at a 28-year high, according to a Governors Highway Safety Association report published Thursday.