lacerNo matter the circumstances, getting into a car accident is a frightening and sometimes traumatic experience. This fear can multiply tenfold for pregnant women that are concerned not only for their own health but for the health and wellbeing of their baby.

Our law firm has represented many mothers-to-be injured in car accidents in Maryland and Washington, D.C.  There is typically no serious injury to the mother in most car crashes and the mother’s injuries rarely meaningfully impact the unborn baby.  But there are several of the more severe injuries that pregnant women can suffer from a car crash.

What Are the Four Major Risks to the Fetus from a Car Accident?

The four major risks to the unborn child in a car accident are placental abruption, uterine rupture or laceration, and direct fetal injury.

What Is the Greatest Fear After a Car Accident While Pregnant?

One of the most dangerous injuries that can occur is placental abruption. This is a condition in which the placenta partially or completely separates from the uterus before the baby is born, which disrupts the baby’s supply of oxygen and nutrients.

A placental abruption can lead to internal bleeding, hemorrhaging, premature labor, and miscarriage. What’s even more concerning is that sometimes there aren’t necessarily any noticeable symptoms of placental abruption immediately following the accident. It is potentially fatal to your baby and dangerous to your own health.

The Risk of Uterine Injury

Another injury that pregnant women are more susceptible to during a car crash is uterine injury, due to the fact that a mother’s uterus is enlarged during pregnancy. In the case of uterine rupture, when the uterus tears, both the mother and child are at risk of life-threatening complications such as internal bleeding.

Does a Car Accident Increase the Risk of Miscarriage?

Car accidents increase the risk of miscarriage. A woman’s body is built to protect a fetus – the uterus, placenta, amniotic fluids, and the other structures in the mother’s abdominal cavity are designed to protect from damage. In a serious car accident, the mother is subjected to extreme physical trauma that the baby sometimes can’t withstand.

Injuries to the Just the Baby

In addition to the various injuries that a mother can suffer during an accident, there are also several potential fetal traumas that can occur. Your baby could sustain a head injury from the crash. The baby’s brain jolts forward and back, hitting the front and then the back of the skull.  The injury is like shaken baby syndrome It can cause serious, sometimes fatal brain damage or birth defects. To avoid this, it’s important to wear a seatbelt because seatbelts reduce trauma to both the mother and the baby.

A lot of pregnant mothers worry about whether wearing a seat belt could cause harm to their babies in the event of an accident. Experts agree that wearing a seatbelt in the car is the safest option for everyone, including pregnant women. They are the most effective means of saving lives and lowering the risk of injury in the event of an accident. Still, there are several safety tips for pregnant women regarding seatbelts that can further minimize their chances of injury.

Do I Need to Seek Medical Attention After a Crash If I’m Pregnant?

It goes without saying that it is important to seek medical care following an accident to make sure that there are no internal injuries that go unnoticed. This is even more so if you are pregnant.

As previously mentioned these injuries are a worst-case scenario when you’ve been in an accident, and there’s no universal answer to whether to go to the ER or wait to see your primary care physician because the circumstances of each accident are unique. You may have just been in a fender-bender that caused no serious injuries.

But if you are pregnant, it is important to remember that even if you feel you don’t have any injuries, your unborn baby may have been hurt. At the very least, the doctor can perform a quick checkup on the baby to relieve any anxieties you may have for their wellbeing. You should immediately go to the ER if you show any of these symptoms:

If the car accident was minor enough and there was no serious impact to your abdomen, it would probably be fine to wait and make an appointment to be seen by your regular physician. Still, in the time it takes to schedule a checkup, you should remain vigilant for later symptoms of injury.  Symptoms of trauma to the fetus will include: 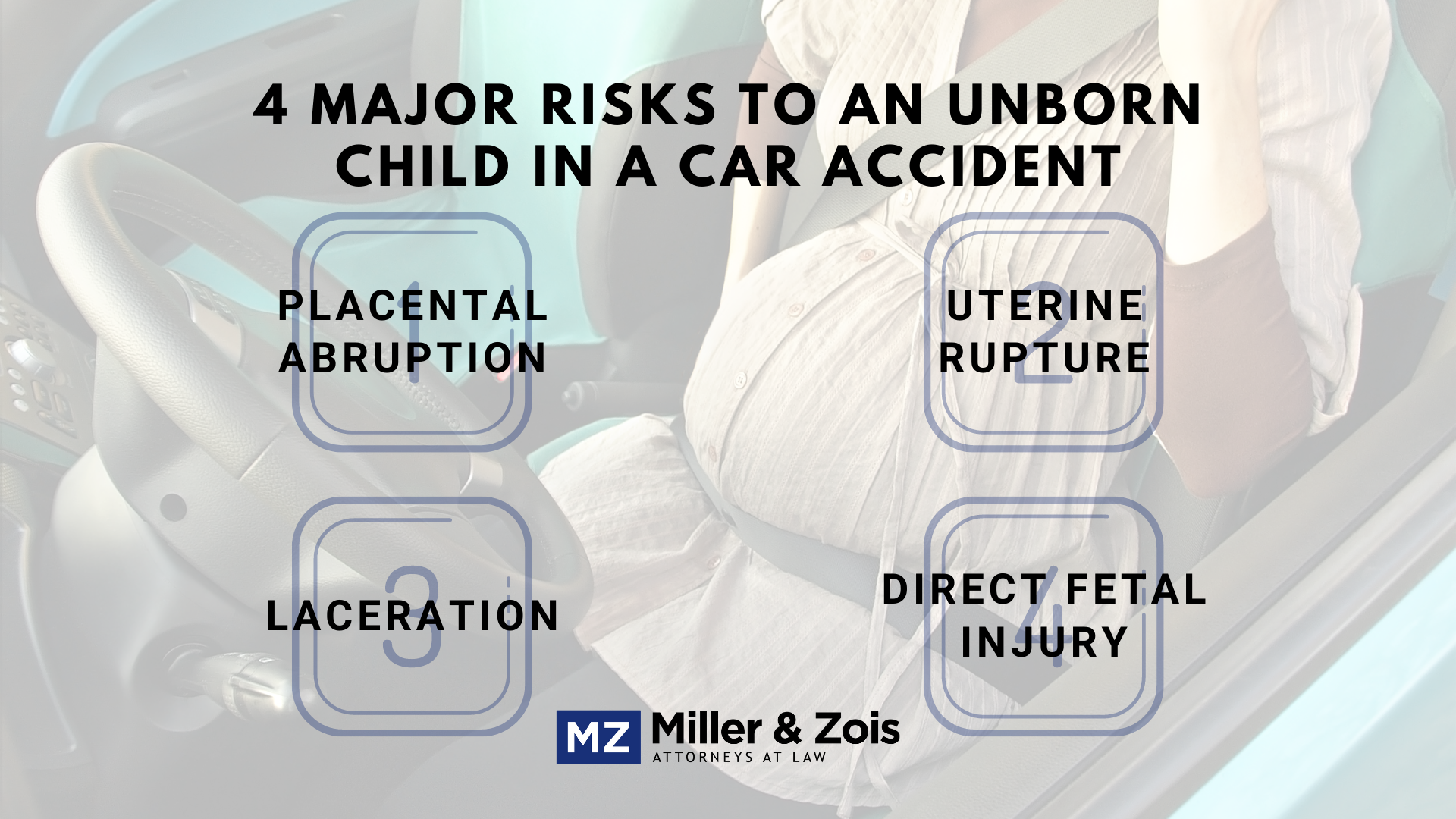 Both you and your child face a significant risk of injury when you in a serious car accident. As a pregnant woman, you will probably have far more medical expenses than other car accident victims and will most likely have to go through many hours of fetal monitoring to make sure that the baby is uninjured. There will also have to be more medical appointments with an obstetrician or other specialists to check on her baby’s health and safety in the long term.

Additionally, if the baby is born prematurely because of injuries sustained from a car accident, they may require emergency surgery or an extended stay in the ICU, which can be a crippling expense. Due to birth injuries, your baby may need to be seen by various specialists. Over the years, developmental issues stemming from brain injuries require various therapies – speech, occupational, and physical.

With so many extra medical appointments on top of the mental and emotional strain caused by an accident, it is extremely important to be compensated properly while trying to process the trauma of being in an accident while pregnant. If your child has suffered from birth injuries because of a serious car accident, the at-fault driver could be legally obligated to pay for your medical bills, lost wages, and pain and suffering.

Below are sample stories involving pregnant women who were injured in a car accidents.  I have handled a lot of these cases and I do believe that being pregnant increases the settlement value even if there is no harm done to the baby. Why?  Everyone understands that the trauma of a car accident is greater when you are fearing for your unborn child, even if you ultimately learn that the child suffered no injuries.

Does the Settlement Value of Car Accident Claim Increase Because the Victim Is Pregnant Even If the Child Is Unharmed?

All things being equal, the settlement value of a case involving a pregnant woman should be higher even when the unborn child is unharmed. Why? There is invariably trauma and stress that comes with the fear of your child may have suffered an injury. I would argue, and most anyone who is a parent would agree, that even irrational fear is perfectly normal and expected when you are pregnant.