Riding a motorcycle can be very dangerous. If you get in almost any type of accident on a motorcycle you can expect some serious injuries and you could easily die. Of course, this danger and the thrill it generates is exactly what draws people to motorcycles in the first place.

Have Fun and Not Die

There are certain basic safety principles that anyone riding a motorcycle, sports bike, or similar vehicle needs to follow. The first and most obvious is the use of protective gear. Wearing a helmet is the single most important thing you can do to protect yourself on a motorcycle. If you’re wearing an appropriate helmet and you get in a motorcycle accident, your chances of suffering a brain injury will be decreased by 67%. Your chance of dying decreases by 40%.

END_OF_DOCUMENT_TOKEN_TO_BE_REPLACED

Wearing a bike helmet is the lowest possible hanging fruit to save lives on motorcycles and bicycles. We are making tons of progress, we just need that progress to continue.

END_OF_DOCUMENT_TOKEN_TO_BE_REPLACED

Our motorcycle accidents see a lot of cases involving lane splitting and the question of whether motorcycles can drive between lanes. Let’s talk about what lane splitting is and what the Maryland law is on this subject.

What is Lane Splitting?

END_OF_DOCUMENT_TOKEN_TO_BE_REPLACED

Two weeks ago, I wrote a post explaining what car insurance special investigations units (SIU)do and their purpose. Today, I stumbled across a new opinion that went up to the 10th Circuit Court of Appeals. The basis for the lawsuit seems that the plaintiffs were annoyed that Progressive Insurance – undoubtedly an aggressive car insurance company – sent their claim to their special investigations unit.

The case involved the plaintiffs’ claim that someone had stolen and damaged their car. Progressive Insurance referred the claim to its Special Investigations Unit because: (1) the vehicle was for sale at the time of the loss, (2) the column was not compromised, (3) the vehicle was a “gas guzzler” (the claim arose at the height of the gas prices in 2008); and (4) both sets of keys were in the Walkers’ possession at the time of loss.

Progressive Insurance asked the plaintiffs to produce photos from the vacation they were on at the time of the loss. The plaintiffs sent them some pictures which overzealous Progressive thought were altered. Goofy stuff that all got squared away. The Special Investigations Unit concluded the loss was legitimate and paid the claim.

END_OF_DOCUMENT_TOKEN_TO_BE_REPLACED
Some jurors see a bike plaintiff and think this

A law firm dedicated to handling just bicycle accidents? You will not find that in Maryland. But New York is a big city.

The New York Times exaggerates a little bit. The lawyers at Rankin & Taylor handle other cases, including this one involving a masseuse who says police required her to clean a toilet at the station before releasing her. (Crazy, right?) But they don’t appear to run from the fact that their focus is representing bicyclists who get tickets in a New York that is increasingly anti-bicyclist.

END_OF_DOCUMENT_TOKEN_TO_BE_REPLACED

An Illinois jury awarded $1.275 million to the family of a 25-year-old woman who had almost completed her nursing degree and was killed while driving to her job at a hospital. Tired driving appeared to be the cause of the car accident: the Defendant just fell asleep and hit the Plaintiffs’ decedent.

The damages only trial lasted four days. The jury heard four grueling days of testimony from the family. Not that a tragedy like this can get worse, but this young girl had already been through a lot: surviving two kidney transplants only to be senselessly killed by someone driving down the road.

You hate to say only $1.275 million. That is a lot of money. That said, it seems like an extremely low verdict for the death of a 25-year-old girl. In Maryland, jury awards are cut in cases like this – it is unlikely there were significant economic damages for the family of this young woman. Still, juries in Maryland and in most states are not told about a cap and I think, just symbolically if nothing else, the award should be higher for a 25-year-old girl who overcomes much adversity to survive and thrive.

END_OF_DOCUMENT_TOKEN_TO_BE_REPLACED

The hardest car accident cases to try are he said/she said accidents where there are not natural facts that make one version more likely than another. The classic example of this scenario is lane change/merger accidents. Which car came over into which lane? Even a good accident reconstructionist struggles to put the pieces together. So it often comes down two factors: (1) which version seems more likely (incredibly subjective), and (2) which driver has more credibility (incredibly subjective squared).

According to a Jury Verdict Research study of jury verdicts in these types of cases, the results are what you might intuitively expect: 50/50. The JVR study found car accident plaintiffs win about 48 percent for lane change collisions and 45 percent for merging collisions. The average verdict is $47,807. 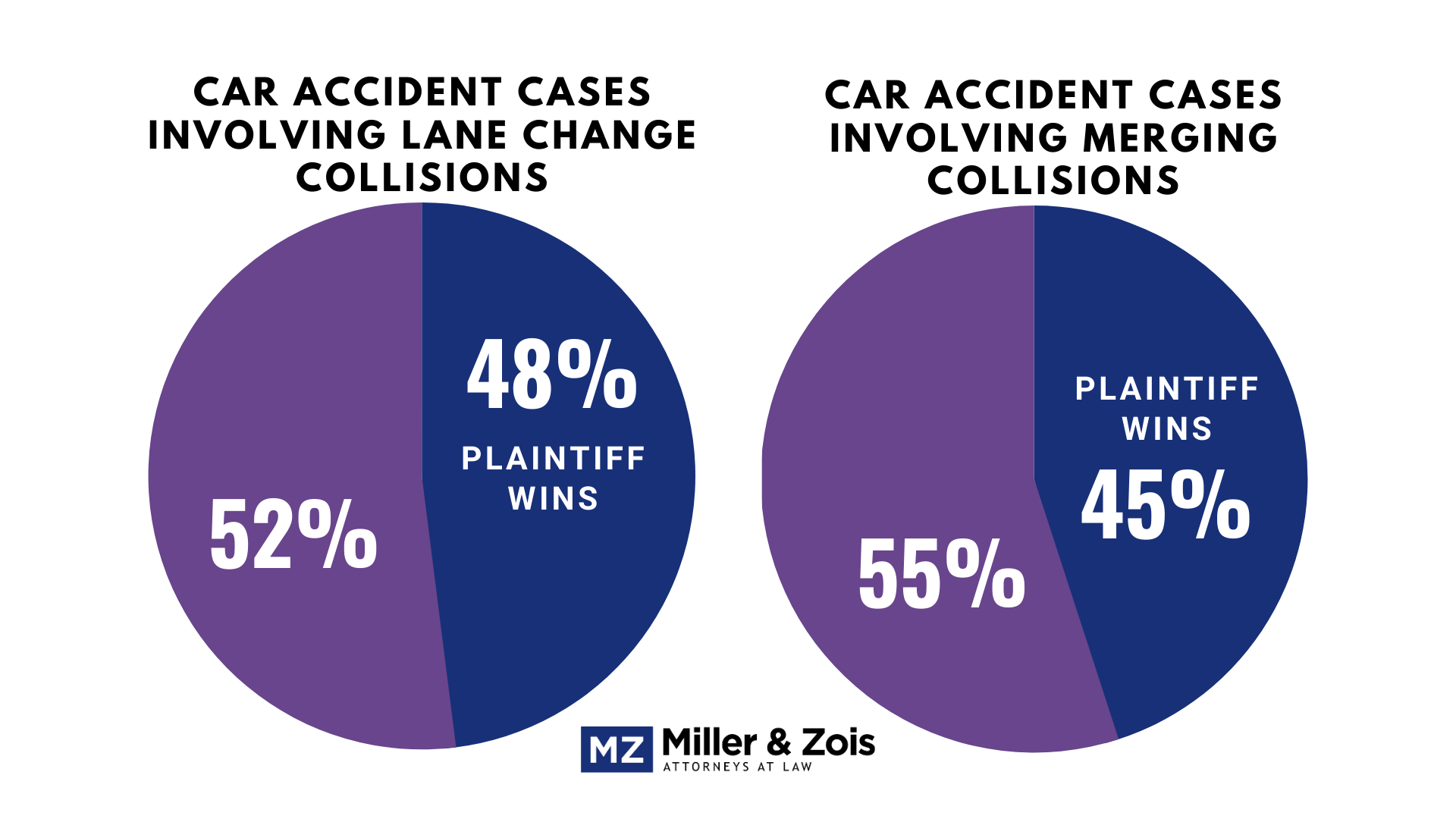 We have tried and won these cases. But our firm will turn down most lane change or merging crash cases unless there is something compelling that makes us think we will win the case. We need two things to move forward in a lane change or merge crash case: (1) a very serious injury (sad but true commentary on the real world), and (2) a client that is extremely credible.

The Baltimore Sun has an article about a police officer who has been suspended after giving chase to a motorcyclist which resulted in an accident that killed the fleeing motorcyclist.

The Sun reports that Baltimore police are instructed to chase a vehicle only if the driver or passengers are believed to have committed a violent crime or pose a risk to public safety.

It has to be frustrating for police when motorcyclists drive by police at excessive speeds, thumbing their nose at law enforcement. The question is where to draw the line between trying to apprehend suspects and keeping reasonably safe the general public, the police officer, and, yes, even the fleeing suspect. Personally, I have no idea where that line should be drawn or whether the police officer acted appropriately in this case.

Red light/green light cases are maddening to take to trial. Sometimes, an accident lawyer just knows the defendant is lying… but can’t prove it. Often, there is no solution to this problem in red light/green light or other liability dispute car and truck accident cases. There are no witnesses and all you have is the police report. But sometimes, there is proof out there that the defendant is lying because the light sequence report is mutually exclusive of the defendant’s version of how the car accident occurred.

The solution by now for Maryland accident lawyers is obvious: if you have a liability dispute where light sequencing is an issue, get a copy of the traffic sequence report from the state of Maryland.

Why the sudden decline in fatalities? No one knows for sure. The optimists argue that motorcycle safety and easier to handle motorcycles are the reason for the decline in the death rate. The pessimists argue that economic meltdown means less discretionary income, which means less motorcycles on the street. Some have also suggested bad weather played a paradoxically positive role – less good days to ride equals less motorcycle accidents. Let’s hope the optimists are right and this new trend forebodes a shift to decreasing the overall number of motorcycle accidents.