A truck accident lawsuit recently filed in Philadelphia revealed that one of the worst highway accidents in the history of Pennsylvania may have been caused by a FedEx driver wearing noise-canceling headphones behind the wheel. Wearing headphones or ear pods while driving is illegal in Maryland and most other states and the tragic case from Pennsylvania is a sharp reminder of why.

In January 2020 a tour bus full of passengers was on a rural, mountainous stretch of the Pennsylvania Turnpike roughly 30 miles east of Pittsburgh in Westmoreland County, PA. The bus was going on a trip from New Jersey to Cincinnati, Ohio.

At around 3:30 in the morning, the bus went too fast on a downhill curve on the highway and went off the road and up onto an embankment causing the bus to roll over back onto the highway. A large FedEx tractor trailer truck full of packages apparently failed to notice the rollover and barely slowed down before hitting the bus after it had rolled over. 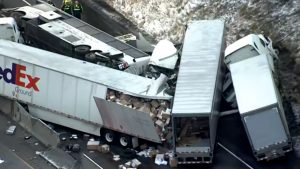 Seconds later, another large truck (this time a UPS tractor-trailer) came around the bend and slammed into the wreckage with little or no opportunity to stop first. It was described as one of the worst car accidents in state history.  A total of 5 people were killed in the accident and another 60 people suffered physical injuries and were hospitalized.

Three of the fatalities came from the tour bus including the bus driver (58), a female passenger (35), and a child from New York (9). The child and a female passenger were decapitated when the FedEx truck struck the bus. The two other fatalities were the driver and co-driver of the UPS truck.

The accident happened on a steep descent down a mountain where the posted speed limit is 70 mph.  A number of warning signs are posted about sharp curves in the road. NTSB officials said the road had been resurfaced within the last year and was in good condition.

This week, a lawsuit was filed on behalf of many of the victims of the accident. The defendants named in the lawsuit included the tour bus company and FedEx Ground Package System Inc. (the FedEx company responsible for the truck that hit the bus).

The headphones prevented Stowers from hearing the bus rollover or hearing the alert from the FedEx built-in collision alarm system warning of objects ahead. Had Stowers not been wearing the headphone he likely would have heard these and avoided the collision.

Wearing Headphones While Driving is Illegal

It is illegal to wear headphones or earplugs over both ears while driving in in most states, including Maryland and Pennsylvania. The applicable law in Maryland is § 21-1120 of the Transportation Article which provides:

(a)  Earplugs.- A person may not drive a motor vehicle on any highway or on any private property that is used by the public in general in this State while the person is wearing over or in both ears earplugs.

(b)  Headsets.- A person may not drive a motor vehicle on any highway or on any private property that is used by the public in general in this State while the person is wearing over or in both ears a headset.

(c)  Earphones.- A person may not drive a motor vehicle on any highway or on any private property that is used by the public in general in this State while the person is wearing over or in both ears earphones attached to a radio, tape player, or other audio device.

This law prohibiting drivers from using headphones or earplugs has been around for a long time, but it has taken on increasing significance in recent years as new technology makes things like noise-canceling headphones more common. The obvious purpose of the law is to ensure that drivers utilize all of their senses (including hearing) to recognize and avoid hazards on the roadways.

The accident described above is an extreme example of the tragic consequences that can potentially result when a driver is not able to hear alerts when behind the wheel. Had the FedEx driver in this situation not been wearing the headphones he may have heard the sound of the bus rolling over ahead of him and slowed down. He definitely would have heard the collision assist alert from his truck.

If you have been injured in an auto or truck accident, contact our Baltimore accident lawyers today for a free consultation.