Left-hand turn accidents can make for difficult and complicated auto accident lawsuits. An accident involving a left-turn can cause devastating injuries and determining fault is not always as easy as it might seem. 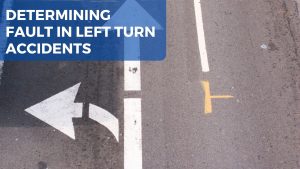 At first glance, determining fault in left-turn accidents may seem simple because the driver making the left turn has an obligation to yield to oncoming traffic.  That simple assumption is correct in the lion’s share of cases.  When you call our law firm and telling us another driver to a left turn in front of you, our lawyers are pretty confident, without hearing anything else, that you have a case.  Similarly, if you are the driver who took a left turn, it might be pretty hard to argue you are not at fault.

But… you have to hear the entire story.  Because the assumption that the driver who made the left turn is at-fault sometimes fails.  This is particularly true, as I explain below, in Maryland and Washington, D.C.

Despite the apparent simplicity of the law regarding left-turns, liability for left-turn accidents can be much more complicated. This is because Maryland has a rule called contributory negligence which holds that if a party is even partially at fault for causing an accident, they cannot recover ANY damages. What this means is that even if you did not have the right-of-way, if the other driver contributed to the accident by speeding, texting while driving, etc., then the contributory negligence rule technically blocks them from pursuing damages. Even if the other driver is only found to be 10% at fault and you are 90% at-fault, under Maryland law,  her negligence would bar them from recovering damages.

Another factor that tends to limit the bite of Maryland’s contributory negligence rule in left-turn accident cases is how difficult it usually is to prove that the other driver was partly at fault. Here is an example of how this works:

Jane goes to make a left turn into a shopping center on a busy road like Reisterstown or York Road. She is not at an intersection so there is no green arrow. Jane’s field of vision is partly blocked by a truck turning left the other way, but it seems like there is a gap in traffic so Jane pulls the trigger. A white SUV driven by Billy seems to come out nowhere and slams into the side of Jane’s car. Billy definitely had the right-of-way. But Jane has no doubt that Billy was driving VERY fast and has no doubt he was going twice the posted speed limit or more. Jane also thinks she saw Billy talking on his cell phone at the time of the accident (without a hands-free link).

In the example described above, Jane is definitely “at-fault” for the accident. However, if Billy was speeding and talking on a non-hands-free phone at the time of the accident, he would be barred from getting damages under Maryland’s contributory negligence rule. The problem is Jane needs proof that Billy was speeding and/or talking on the phone when the accident occurred. Jane’s own testimony won’t be enough. At a minimum, Jane would need supporting testimony from other people who witnessed the accident.

It will be extremely hard for Jane to get witness evidence in this situation. Even if lots of people were around at the time of the accident, most of them were probably not paying attention until AFTER the collision occurred. Jane needs a witness who was actually watching the whole thing and would testify that Billy was on his phone and appeared to be speeding. Finding someone with that sort of viewpoint is highly unlikely and getting them to cooperate and testify can be a whole separate challenge.

Where Do I Find the Text of Maryland's Left Turn Law?

(a) Turning left. – If the driver of a vehicle intends to turn to the left in an intersection or into an alley or a private road or driveway, the driver shall yield the right-of-way to any other vehicle that is approaching from the opposite direction and is in the intersection or so near to it as to be an immediate danger.

(b) U-turn. – If the driver of a vehicle intends to turn to go in the opposite direction, the driver shall yield the right-of-way to any approaching vehicle that is so near as to be an immediate danger.

The last clear chance doctrine is another tool plaintiffs can use to avoid getting tackled by Maryland’s contributory negligence law. The last clear chance doctrine holds that even if the plaintiff is partly at-fault (speeding, etc.), that will not be barred from seeking damages if the defendant had the last clear opportunity to exercise reasonable care and avoid the accident. The idea behind the rule is a defendant should not be permitted to avoid liability when they had the chance to avoid the accident.

Let’s go back to our example above with Jane and Billy to see how the last clear chance rule might apply. Let’s assume Billy sues Jane for negligently turning in front of him. Jane presents witness testimony to establish Billy was speeding and, therefore, Jane can assert a contributory negligence defense.

Billy can potentially use the last clear chance doctrine to overcome his contributory negligence. To establish a last clear chance, Billy would need to show something “new or sequential” happened in the chain of events which gave Jane a fresh opportunity to avoid the accident. Billy could potentially argue that could have made the turn faster and bailed out of the turn after starting it.

If you were injured in a left-turn accident, the Maryland car accident attorneys at my firm can help you establish liability and get full and fair compensation for your injuries.