Another interesting graph from Metro Verdicts Monthly, this time on the median verdicts in leg amputation cases for Washington, DC, Maryland, and Virginia. The District of Columbia and Maryland have comparable verdicts, $2.1 million and $1.97 million, respectively. Virginia? $500,000. I expect some verdicts in Virginia to be lower because the rural areas of Virginia have conservative juries. But one-fourth of the amount? 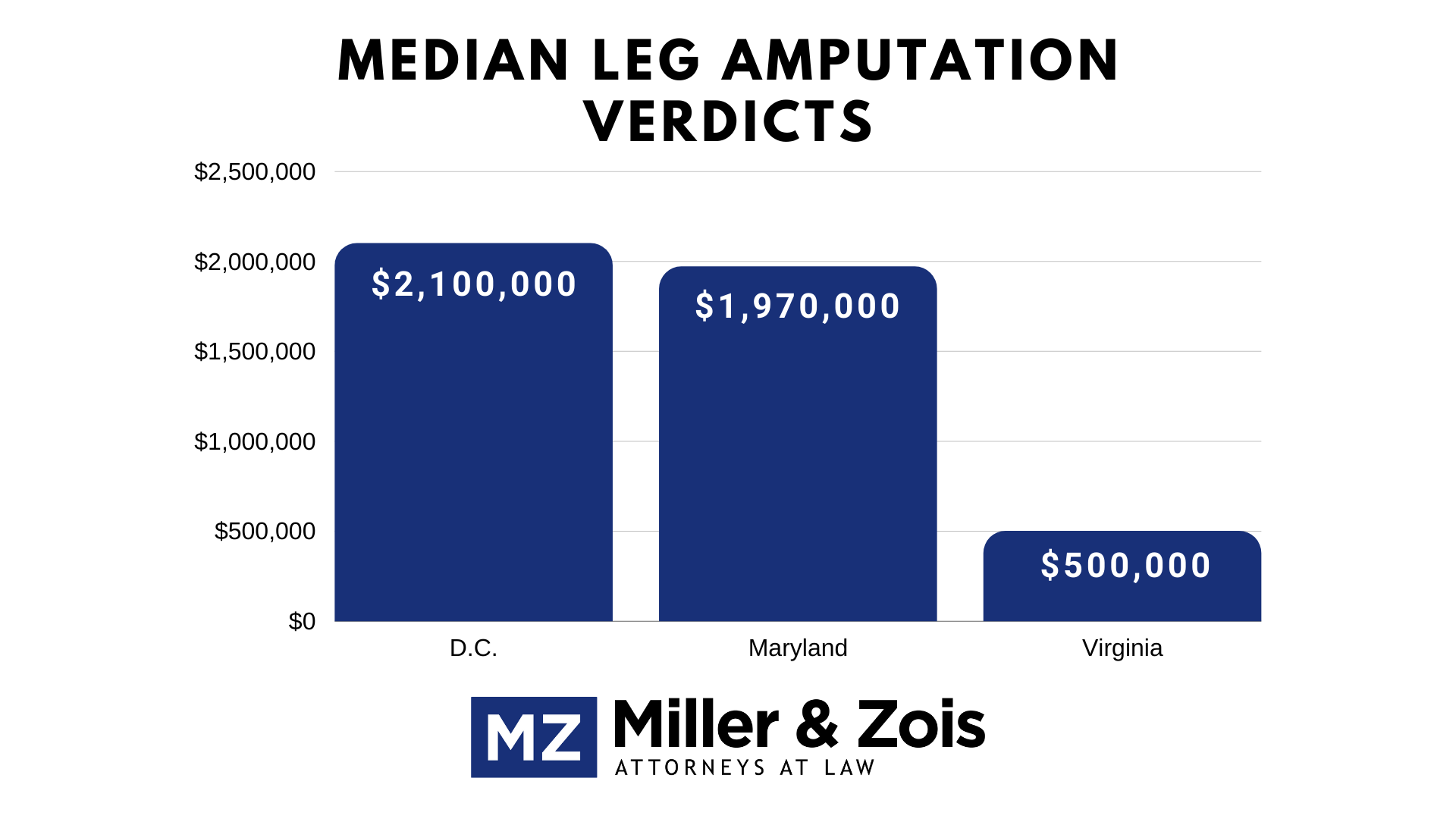 Obviously, this data is not to be taken too seriously by accident lawyers in Maryland or in Virginia, as I discussed earlier this month. But in that post, I noted that Virginia’s verdicts in femur fracture cases are twice the Maryland average. So I cannot figure out the rhyme or reason to these comparative numbers.

I think it is fair to say that with respect to pain and suffering,  you have to value a leg amputation case in Maryland on (1) the statutory cap on damages plus, (2) Plaintiff’s economic expenses. In terms of making the noneconomic damages case, it is important to consider the future costs of a prosthetic leg. Last time we tried a leg amputation accident case, we brought in a prosthetic’s expert from the client’s prosthetic manufacturer from Hanger Orthopedic in Minnesota who I thought was a very effective witness at trial.

Below are leg amputation settlements and verdicts.  These will not tell you the settlement value of your leg amputation case but they will give you greater insight into how these cases are value for settlement by lawyers and insurance adjusters and at trial by juries. 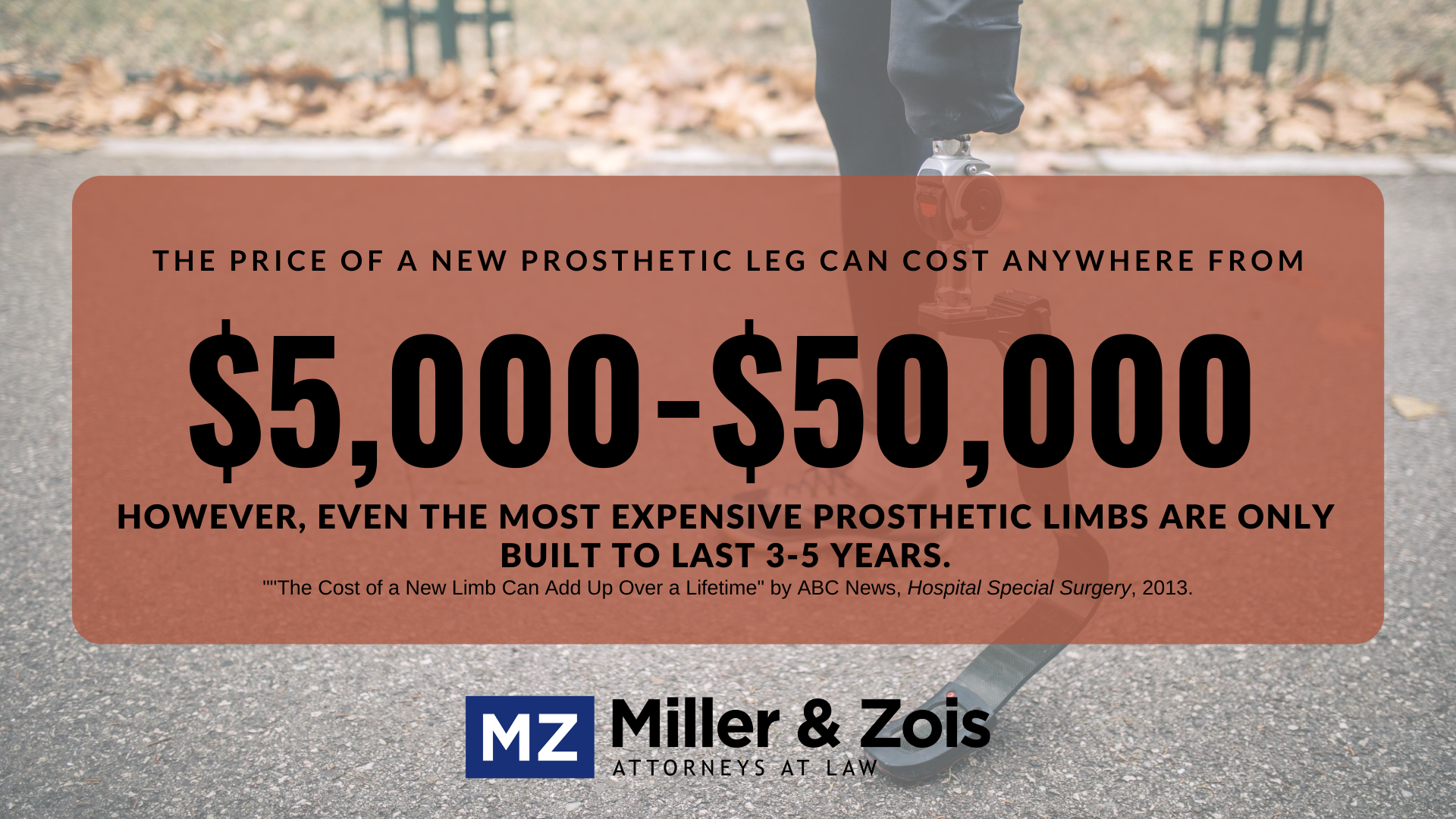 A 30-something man’s truck tire experienced a tire tread separation. He lost control of his vehicle. The man subsequently struck a tree. He suffered permanent brain damage and right leg injuries. The man underwent an above-the-knee right leg amputation. He now required round-the-clock care and gastrointestinal tube feedings. The man’s guardian alleged negligence against the tire manufacturer. They claimed it manufactured a defective product. This case settled for $37,500,000.

A man alleged that an orthopedic surgeon’s negligent performing of his ACL reconstruction surgery caused him to suffer post-operative complications that led to an above-the-knee amputation. During the procedure, the surgeon damaged the autograft. He then left 50 percent of the graft in place and substituted the other 50 percent with a cadaver graft. The man’s injury did not resolve. He was diagnosed with extension contracture and post-operative arthrofibrosis. Two months later, he underwent a knee revision procedure that attempted to release the adhesions. However, the surgeon left the graft in place. The man’s symptoms failed to resolve. He underwent a third procedure, performed by another surgeon, which involved the removal of the graft, adhesions, and hardware. The procedure could not restore function to the man’s knee. After undergoing additional procedures over several years, he had his right leg amputated about the knee. The man alleged that the first orthopedic surgeon negligently performed the procedure by damaging the graft and failing to remove it. He also claimed that the surgeon failed to remove the damaged graft during the second procedure. The jury found the surgeon negligent and awarded a $5,750,000 verdict.

A 70-year-old woman alleged that she underwent negligent post-operative care that resulted in an above-the-knee amputation. She underwent a femoral angioplasty to improve her leg’s blood flow and reduce cramping. The woman alleged that the hospital staff failed to timely remove the sheaths post-surgery, causing her to suffer blood clots. She claimed that the cardiothoracic surgeon failed to remove the blood clot, but instead inflated the balloons and stents used in the angioplasty. The woman alleged that inflating the balloons and stents was dangerous because of the calcium buildup in her leg’s arteries. She argued that he should have performed bypass surgery. Following the procedure, she developed metabolic acidosis. Two days later, the surgeon also performed bypass surgery about two days later. She asserted that this caused significant internal bleeding that resulted in paralysis and gangrene. The woman underwent an above-the-knee amputation several months later. She also suffered a large pressure sore caused by internal bleeding. After multiple debridement procedures, the pressure sore failed to resolve. The woman claimed that her injuries were permanent, and she would need extensive, in-home care for life. A jury awarded the woman a $17,000,000 verdict. Michigan’s non-economic damages cap in medical malpractice cases reduced her net award to $7,500,000.

A 39-year-old man’s chases after a bus after its driver closed the doors on him. His leg becomes caught in the bus’s rear, causing him to severe fractures to his upper and lower leg. He also fell into a coma and could not remember the events that followed after the doors closed on him. The man underwent surgery, which failed to resolve his fractures. He then underwent an above-the-knee amputation. The man was fitted with a prosthetic leg and spent most of his time wheelchair-bound in his sister’s apartment. He died from unrelated causes three years later. The case settled for $1,325,000.

A 50-year-old man was locked out of his apartment while on the second-floor balcony, which was nine feet off the ground. He attempted to leave the balcony by climbing its railing, grabbing hold of the balcony platform, and dropping to the ground. The six-foot, four-inch man’s feet were no more than three feet above the ground. Despite the minimal fall, he suffered a blow-out heel fracture. The man initially underwent an open reduction and internal fixation procedure, which failed to resolve his fracture. His surgeon informed him that no additional surgeries would provide a success rate above 50 percent. The man ultimately chose to undergo a below-the-knee amputation. He claimed residual permanent pain and ambulating difficulties. The man alleged that the door’s negligent design made it appear unlocked from inside, but it would automatically lock when closed from outside. He argued that the apartment complex’s owner should have replaced the door’s configuration or placed a ladder. The jury found the apartment complex’s owner 90 percent negligent and the man 10 percent negligent. They awarded a $1,340,000 award, comprising $240,000 in future medical expenses, $100,000 in past pain and suffering, and $1,000,000 in future pain and suffering.

A large metal sheet slid off a table and fell on a man’s left leg while he was working at a steel service center warehouse. He presented to the emergency room, where they treated his leg and other injuries. After being discharged, he developed gangrene to his leg. The man then underwent a below-the-knee amputation. He claimed permanent injuries that left him disabled and unable to gain employment. This case settled for $305,000.