Jury Verdict Research did a study that found that the average money damages verdict in a car/truck accident case brought by the passenger is $486,098. It sounds like a lot, but high (and maybe uncollectable) verdicts distort the average. The median passenger verdict is $30,000. 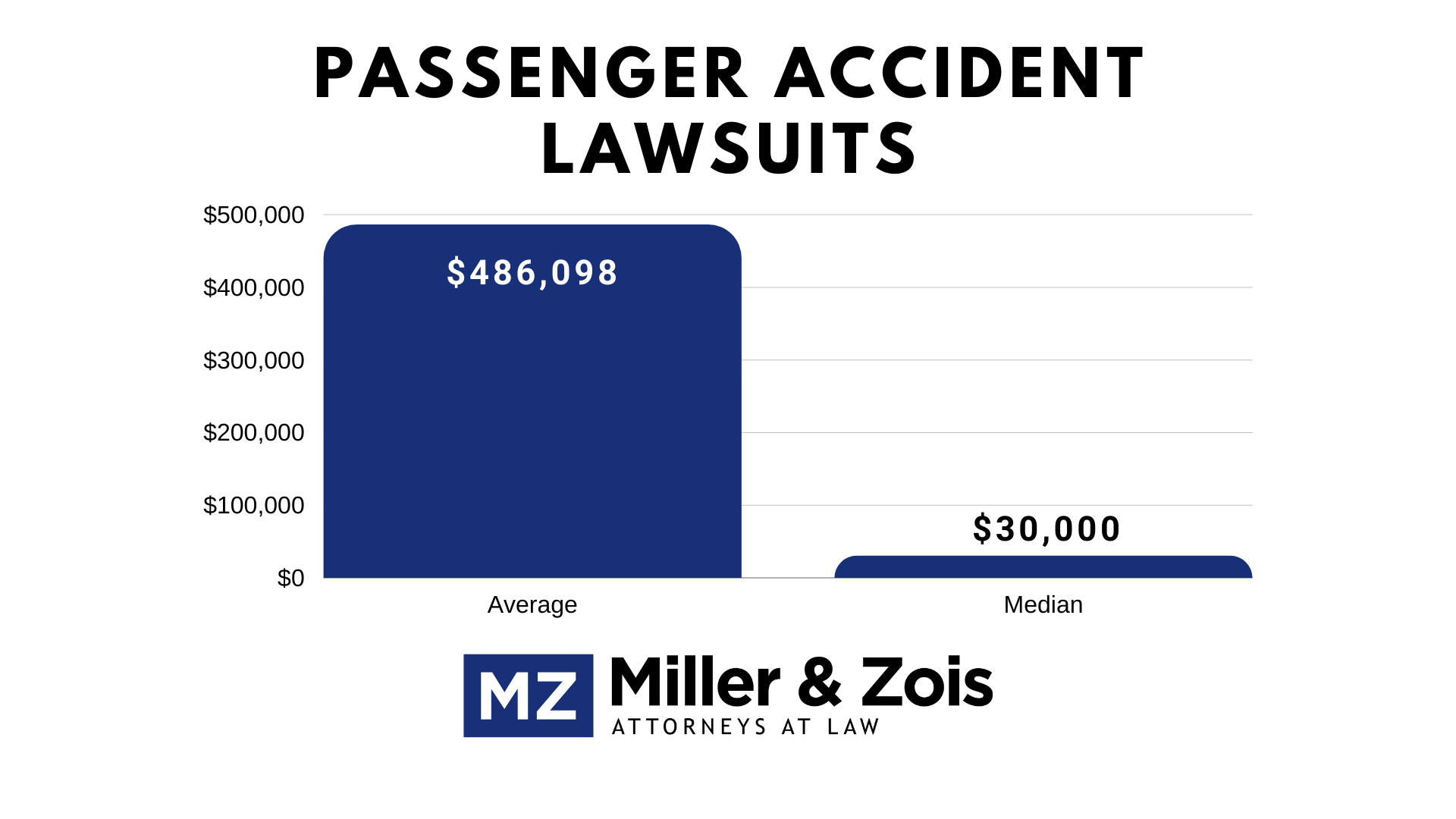 Here is where it gets interesting. I think it is difficult to lose a passenger accident case. Certainly, the passenger is not responsible for the accident (ignoring for a second the “I knew he was drunk out of his mind and I got in the car with him anyway” passenger). Yet plaintiffs only receive money damages in 62 percent of passenger cases that go to verdict. I just can’t make sense of the numbers. Here is how it breaks out: Host Driver’s Negligence: 58% Both Drivers’ Negligence: 64% Driver & Business Negligence: 73% Driver & Government Negligence: 74% Passenger Suits Generally: 62% 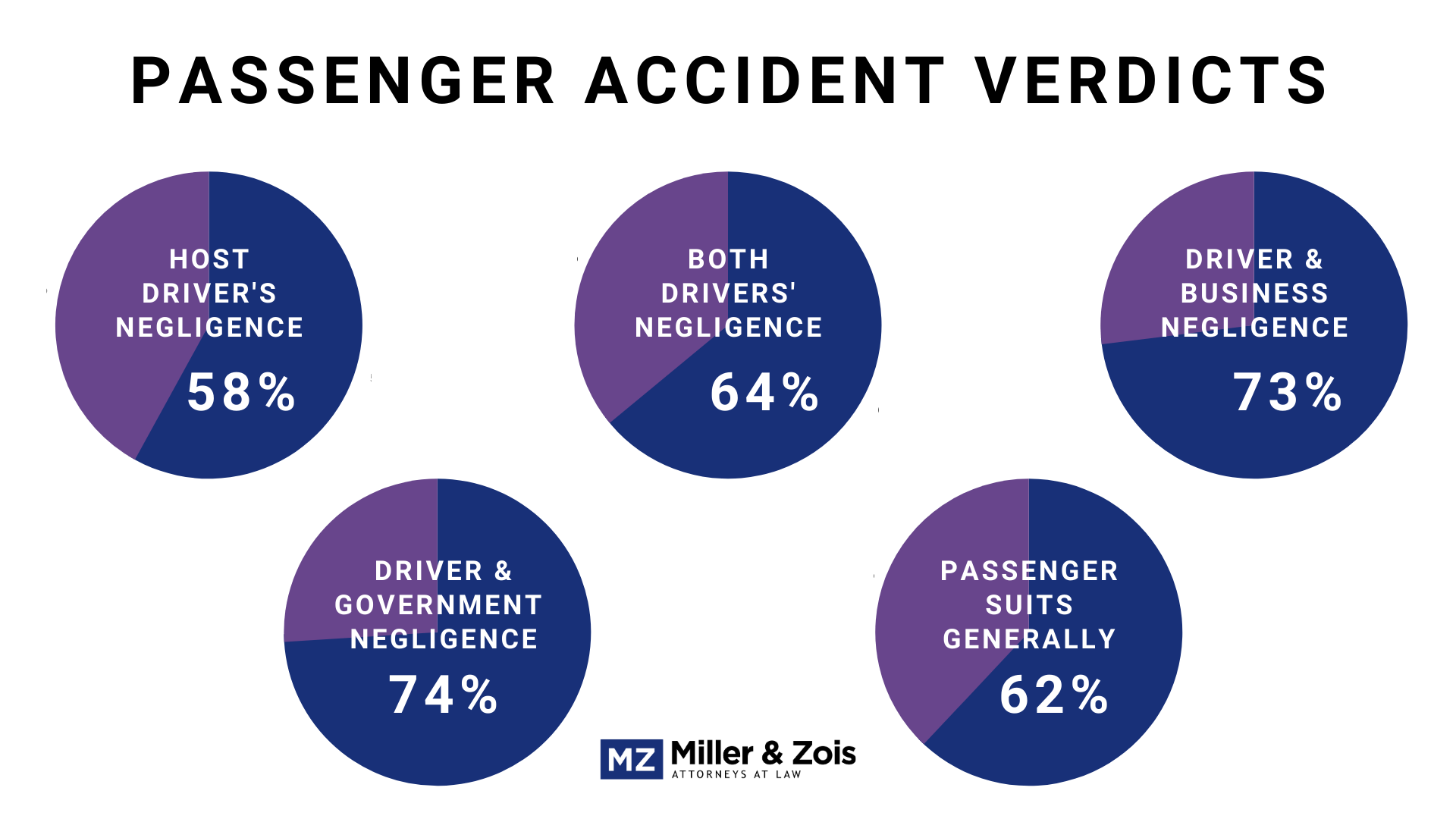 I would love to grab a random handful of the defense verdicts and look at the fact pattern. Because it makes no sense to me. These should be very easy cases for accident lawyers to always win.

A motorist hit an embankment, causing her 16-year-old passenger’s back and knee sprains. The girl’s mother alleged that the motorist’s failure to control her vehicle caused her injuries. This case settled for $10,000.

A woman drove over a road bump, hit a mailbox, and subsequently hit a tree. Her minor passenger suffered a lumbar fracture, a nasal fracture, and unspecified head, eye, abdomen, and back injuries. The boy’s mother alleged that the woman’s inability to control her vehicle caused his injuries. This case settled for $50,000.

A motorist rear-ended a woman’s vehicle at an intersection. The woman suffered multiple herniated discs, her mother suffered the aggravation of her pre-existing disc injuries, and her daughter suffered soft-tissue neck and back injuries. They claimed that the motorist failed to lawfully stop, improperly operated her vehicle, and failed to keep a proper distance. All three were treated with an orthopedist and a chiropractor. The motorist denied liability, arguing that the woman’s negligence caused the collision. She also denied that the three individuals’ injuries were collision-related. The court awarded a $27,558 verdict.

A 37-year-old woman suffered a torn left shoulder and multiple disc herniations after her driver T-boned another vehicle at an intersection. Despite undergoing injections, she claimed permanent injuries. Her physician recommended lumbar surgery, which she chose not to undergo after having missed significant time at work. The woman argued that, despite having the green light, her driver should have waited for the other driver to cross the intersection before approaching. A jury determined that the host driver was 25 percent liable and the non-host driver was 75 percent liable. They awarded a $250,000 verdict.

A motorist ran a red light and T-boned another vehicle. His minor female passenger suffered soft-tissue neck, chest, back, right hand, right shoulder, and hip injuries as well as facial swelling and contusions. The girl’s mother, who also was a passenger in the vehicle, alleged that their driver’s negligence caused her injuries. The case settled for $30,000.

A woman suffered permanent injuries after being in a struck vehicle. She alleged that the non-host driver caused the collision and her injuries. The non-host driver admitted liability but disputed the nature and extent of the woman’s injuries. A jury awarded a $200,000 verdict.

A front-seat passenger suffered multiple fractures, multiple lung injuries, a bowel herniation, a spleen laceration, and other severe injuries after their 85-year-old driver struck a tree. They died two weeks later. Their surviving family alleged that the driver’s negligence caused their death. This case settled for $1,250,000.

A woman and child suffered unspecified injuries after being passengers in a vehicle that struck another vehicle. She, on behalf of her child and herself, alleged that both drivers’ negligence caused the collision and their injuries. The parties settled for the child’s claims for $25,000.

A woman suffered unspecified injuries after an uninsured motorist struck her relative’s vehicle. She sued State Farm for refusing to pay her relative’s UIM benefits. State Farm admitted she was qualified for UIM benefits but disputed her injuries’ nature and extent. Following arbitration, the woman received $50,000.

A woman suffered severe injuries after being in a medical transport van that ran a red light and T-boned a vehicle. She alleged that the van driver’s failure to yield the right-of-way caused the collision and her injuries. The van driver denied liability, arguing that the other vehicle’s driver caused the collision by also running a red light. He also claimed that the woman did not wear a seatbelt at the time. The jury awarded a $1,200,000 verdict.
$1,200,000  – Verdict

A woman suffered severe and permanent injuries after a shuttle bus struck her taxi. She alleged that the taxi and bus drivers’ negligence caused the collision and her injuries. The jury awarded her a $148,000 verdict.
$148,000 Verdict