According to a Jury Verdict Research study released this month, the average jury award for finger and hand injuries is $629,382. This data for fractures, crush injuries, and nerve damage to fingers and hands is based on a review of jury verdicts in the United States over the last 10 years.

This average finger and hand injury verdict is a bit misleading because the data included a $20,000,000 verdict and other verdicts which completely distort the average verdict.

What does give more context?  Median verdict data.  The median verdict for hand and finger lawsuit verdicts, which, by definition, eliminates both high verdicts and the low verdicts, was $73,250. About a third of these injuries occurred in car, truck, and motorcycle accidents.

Remember, too, that hand and finger injuries rarely occur in a vacuum.  Usually, if you have this type of injury, you also have other related injuries that cannot be pulled out cleanly to determine which part of the settlement and verdict was from the hand or finger as opposed to other injuries. 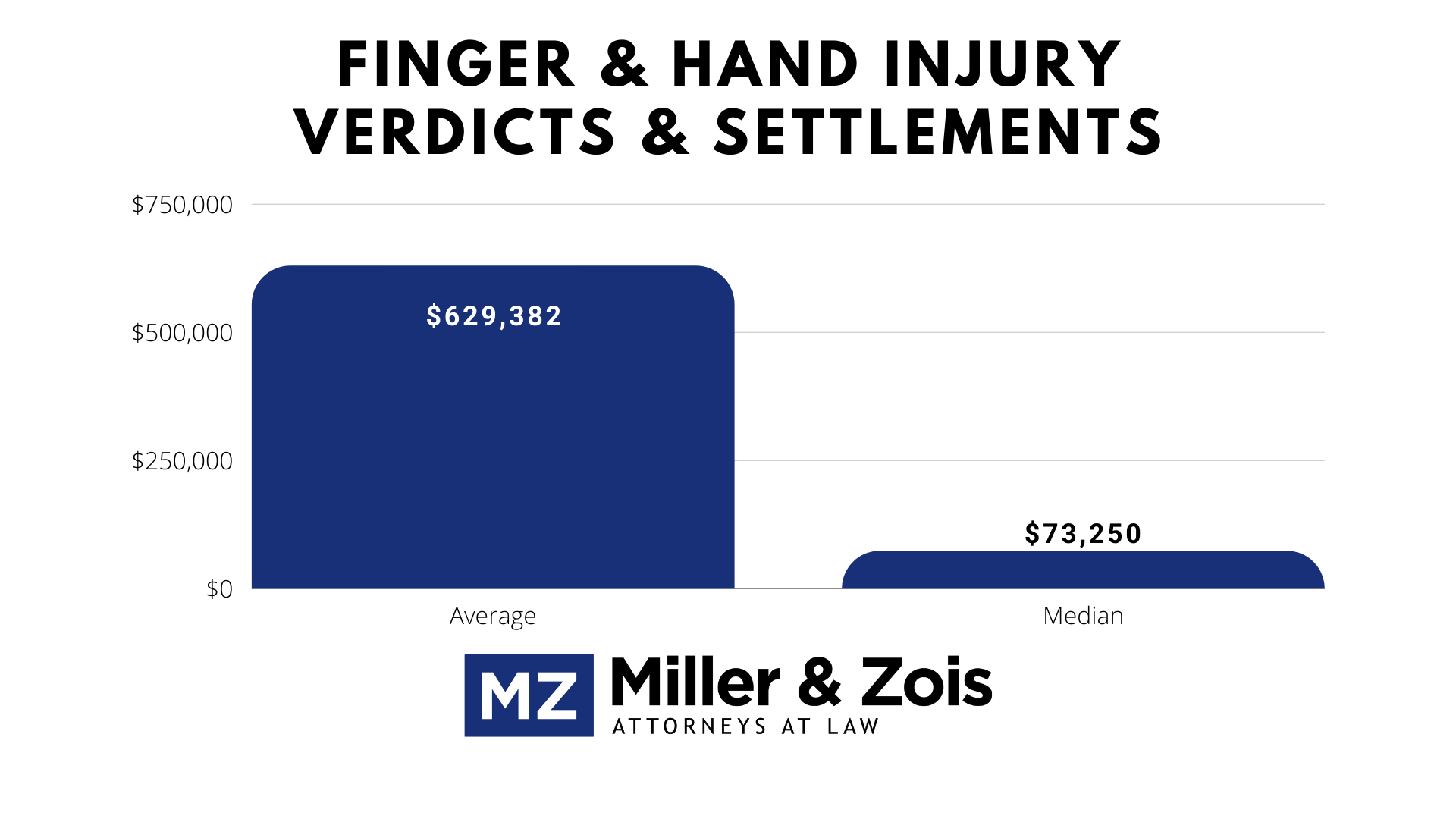 Another way to get more information about the value of these cases is to look at sample cases in other jurisdictions.  While other injuries may be involved, in most of these cases, the predominant injury involves the hand or fingers.

A mechanical claw partially amputated a construction worker’s right hand. The man was left disfigured and physically disabled. He alleged that the construction site’s owners and operators failed to maintain safe working conditions and properly train their employees on operating mechanical devices. The defense denied liability. This case settled for $100,000.

A 40-year-old cyclist was struck by another cyclist. He fractured his left proximal ring finger and metacarpal bone. The man alleged that the at-fault cyclist’s failure to yield the right-of-way caused these injuries. A jury awarded him a $55,406 verdict.

A door closed on a boy at a local Boys & Girls Club. This caused a partial amputation of his right pinky. The boy underwent a reattachment procedure. His parents alleged that the local Boys & Girls Club staff’s negligence caused his injuries. They claimed they failed to maintain safe premises and properly monitor their son. This case settled for $50,000.

A low hanging ceiling fan struck a restaurant patron’s hand. The man suffered unspecified hand injuries. He alleged that the restaurant failed to warn patrons of the hazard and turn off the fans when one was underneath them. A jury found the man 15 percent liable and the restaurant 85 percent liable. They awarded a $148,001 verdict.

A man suffered a right-hand crush injury while operating a fiber feeder machine at work. He was left with permanent disfigurements and scarring. The man alleged that his employer’s negligent removal of the fiber feeder’s safety guard caused his permanent injuries. The defense denied liability. They argued comparative negligence. The jury awarded a $451,000 verdict.

A woman was struck at an intersection. She suffered right fourth finger and rib fractures, headaches, a knee contusion, and multiple disc herniations. The woman alleged that the at-fault driver’s negligent running of a stop sign caused her injuries. The at-fault driver admitted liability but disputed the claimed injuries. He argued that they were pre-existing. The jury awarded the woman $400,000.

A cyclist was struck at an intersection. He fractured his right hand, pelvis, ribs, ankle, heel, and leg. The man also suffered a traumatic brain injury, facial lacerations, a chipped tooth, a collapsed lung, a liver injury, and a spleen injury. He alleged that the at-fault driver’s negligence caused these injuries. The man also alleged that the State of Oregon and the City of Portland designed an unsafe intersection and failed to post bicycle crossing signs. This case settled for $350,000.

A six-year-old girl attended a fitness class at a gym. One of the activities involved carrying a 10-pound kettlebell while running laps. The girl fell while running, which caused the kettlebell to crush her hand. Her parents alleged that the gym staff’s failure to properly monitor the class resulted in her crush injury. The jury awarded the family a $430,775 verdict.

A 2-year-old suffered a left small finger amputation while at daycare. Her parents alleged that the facility’s negligence caused her injuries. The facility denied liability. This case settled for $200,000.

A 14-year-old girl’s finger became caught in a door at school. She fractured her right index finger. She underwent open reduction and internal fixation and extensor tendon repair procedures. Her parents alleged that the City of New York’s failure to properly supervise their schools resulted in her injuries. This case settled for $85,000.

A minor boy played basketball outside of a rental property. He suffered left middle and ring finger injuries after the portable hoop fell on him. The boy underwent a partial amputation of his middle finger. His parents alleged that the rental property owner’s failure to maintain safe premises caused his permanent injuries. This case settled for $300,000.

A 48-year-old bar patron leaned on a bathroom sink while talking to her friend. The sink fell on her hand. She suffered permanent sensation loss and limited mobility in her fingers. The woman claimed she required medical treatments and surgeries in the future. She alleged that the bar’s negligence caused her injuries. The woman claimed it hired an unlicensed plumber who improperly installed the sink. The woman argued that it would not have fallen had it been properly installed. The bar denied liability. They argued that the woman was comparatively negligent for misusing the sink. The jury ruled in the woman’s favor and awarded $328,287.